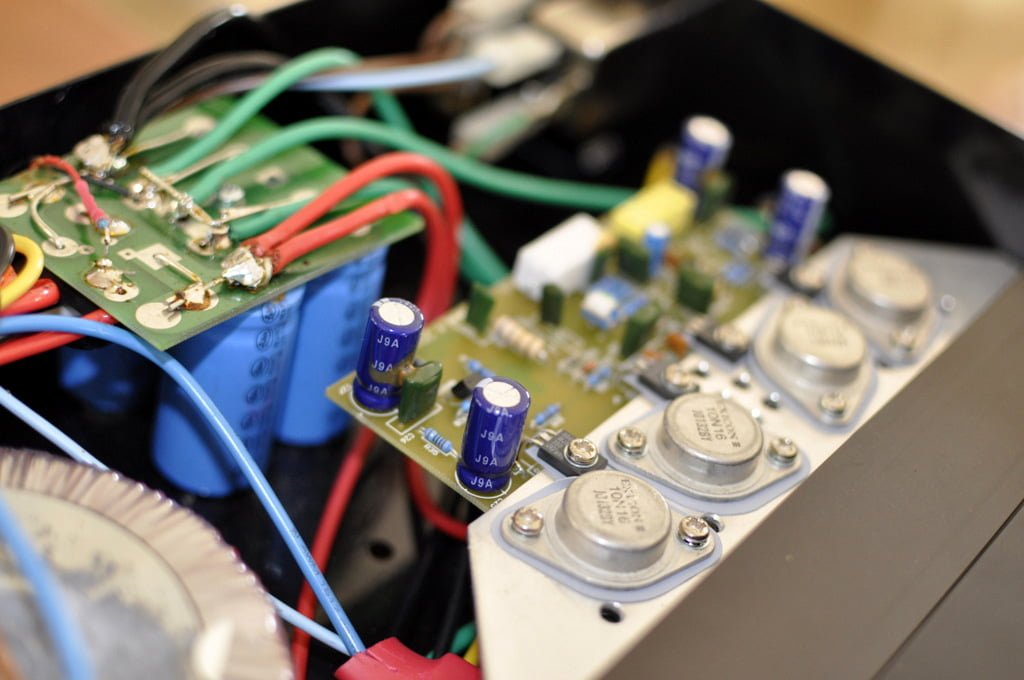 Redgum is an Australian brand I really wanted to be able to write great things about when I serviced and repaired this Redgum RGi120 integrated amplifier.

Sadly, I couldn’t. At the risk of fanboys and other ill-informed folks coming after me, I decided to post the truth about what I found inside this Redgum RGi120 amplifier, popular or otherwise. Read on to find out more.

Updated for 2019: The odd person did come after me, but with the typical lack of science and technical understanding one expects in such cases. You can read some of their thoughts and my replies in the comments below.

Everything in this article is based on my objective examination of this Redgum RGi120 amplifier. I have no stake in Redgum or any other manufacturer, nor am I paid or sponsored by anyone. This article presents my opinions and experiences, from the perspective of a scientist and specialist hi-fi electronics repairer. They do not purport to represent all Redgum products. Other Redgum products may differ from this one and things may have changed since this unit was manufactured.

Someone mentioned this article on a local hi-fi forum and things went crazy. I received over 600 hits in one day, my greatest hit count to that point. The manufacturer even responded, stating that using better parts would not make any difference, an extraordinary claim and one that is factually and technically incorrect. Redgum stated that they use the lowest quality parts they need, to build the amplifier and have it function, hardly a great endorsement of their thinking…

I initially pulled this post but, on balance, my feeling is that users deserve to know and be informed about what is inside the gear they buy. Nor am I going to be scared by crazed fanboys or the manufacturer, who it seems may have left one of the ‘unbiased’ comments below…

I’m not paid by or afraid of anyone. I’m a completely independent repairer and writer and Unbiased third-party information helps people make informed decisions. Equipment like this Redgum RGi120 amplifier exists in the public domain and is therefore subject to scrutiny.

Readers can make up their own minds about what I found. I have no agenda, other than to debunk bullsh#t and to examine the engineering behind audio equipment. I have nothing against Redgum, or any other manufacturer for that matter. So if you don’t like what I’ve written, best to examine why that really is.

I hadn’t worked on other Redgum gear before except for one sub-woofer amp.  I have however worked on a great deal of audio and laboratory gear over the years. I had heard rumours that Redgum gear was overpriced and used low-grade parts. I was able to find out for myself when a customer brought in a Redgum RGi120 amplifier for service. One of the twin volume controls (more on that later) had come loose and the speaker connectors were also loose. Popping the lid, I was surprised by what I found.

The Redgum RGi120 chassis contained two small amplifier boards, attached to a fan-cooled heatsink. Fan cooling enables smaller heatsinks to be used than would otherwise be possible with convection cooling. This is usually done to save money, small heatsinks and fans are cheaper to manufacture and than large heatsinks.

The Krell KSA 150 for example operates in class-A and generates an enormous amount of heat, but there is no fan to be found. Krell went down the path of massive heatsinking, which is costly, but quiet and very reliable.

Altronics for example market ‘PA’ style amps like this, with seemingly high power outputs (into an unspecified load, at an unspecified power bandwidth), for a low cost. These products are cheap, partly because they feature small fan-cooled heatsinks and use low quality and cheap Chinese parts. Most of this gear is also made in China.

The Redgum RGi120 also contained a modest input switching board with selector and volume pots mounted directly to it. This is good, the pots and switches used are however very basic. Anyway, it was the other parts inside that had me scratching my head. We are talking about cheap Chinese parts, the same parts sold by Jaycar and Altronics.

The capacitors in this Redgum RGi120 are low-spec Lelon/Samwa/Suntan/Hung Long/Long Schlong brand. These are not what one would expect to find in amplifier that costs over $AUD2,500 (in 2010!). The resistors are also Altronics/Jaycar metal film types, with poor temperature coefficient, poor noise specs (guessing here based on similar priced Chinese parts because I could find no specs, not a great sign) and worth cents each.

The main filter caps are Lelon brand and similar in quality to the other small caps. I dislike Lelon capacitors and other cheap Chinese caps like them. In my opinion, they do not belong in an amplifier like this, and yes they really DO make a difference sonically and in terms of reliability. There are lots of cheap ‘green caps’, which are a metalised polyester capacitor. MKT types by ERO/Wima/Siemens have better characteristics, but of course cost more too.

The transformer is again a cheap Chinese toroid. It looked to be around 300VA rated, which would be marginal for the power spec of the amp. Perhaps it was 500VA, I don’t know for sure. The output transistors are Exicon MOSFETs. Exicon is a brand known to be associated with fakes of other higher spec transistors in the past – you can read about this here.

Not Enough for the Money

If I had more time to spend on this amp, I would have performed a power output test, with the amp driven continuously by a 1kHz sine wave, into an 8 ohm load, a standard test configuration. To be clear – I am not saying that there is anything fake or counterfeit in this Redgum RGi120. In my opinion, a manufacturer like Redgum would never knowingly use fake parts. What I am saying is that for your $AUD2,650 I believe you deserve a better bill of materials.

Yes, this amp is made in Australia, which is great. My concern is that, with just a small increase in cost, this amp could be made with some high-reliability, high-quality parts. Everything about this amp would be better with better parts, especially low ESR, high ripple current, high-temperature Panasonic/Elna/Nichicon/Rubycon capacitors.

It’s quite nicely laid out, the boards are of reasonable quality at this price, there is some glue used to hold parts to one another and this is good practice in places. Trimpots are locked with sealant to prevent movement, but the mechanical construction of the chassis and the wiring is crude.

Trying to maintain channel balance is hard (almost impossible) when you have to adjust two volume controls independently. Seriously, whoever thought that two separate volume controls were a good idea? I have seen rubber bands placed around these dual volume controls in an attempt to get them to move in sync with one another! This is simply a stupid design choice.

This is a bad design choice, guaranteed to create channel imbalance. It is not surprising that almost all other manufacturers use one volume control, with a balance control that can be used to correct channel imbalance as needed. Or perhaps we should ask Accuphase, Mark Levinson or Nelson Pass why they choose not to use dual-mono volume controls… As for the amp having a ‘key’ to turn it on, the less said about that the better. Just don’t lose the key..!

For those who mistakenly think that parts don’t matter, I can only say that science, engineers and ears say they most certainly do. I’ve seen how premium parts make a real difference to reliability and performance. Capacitors and semiconductors vary enormously between nominally similar parts. Spending a few cents more per part will potentially decrease a manufacturer’s margin, but will potentially add increased service life and improved technical performance to a product. This adds value and I believe it is a false economy to use the cheapest parts you can get away with.

Peddlers of the ‘cheapest is best’ notion are either technically ill-informed and unaware of the merits of using better parts or are hiding something. Yes, there is plenty of nonsense written in forums, but for those able to test and measure equipment parameters, the merits of using better parts are easy to justify. Plus I have two very refined instruments called ears – they tell me that when I use quality parts in crossovers, amps, DACs, that things improve.

If in doubt, ask yourself this: why is it that HP/Agilent and Tektronix test and measurement instruments, the gold standard in engineering excellence, always contain premium parts?

This gear is used by the military, NASA, NSA, CIA, FBI, Sandia Laboratories, Lockheed-Martin, Boeing etc. They buy the best they can buy and purchase equipment that can last and deliver specified performance for decades sometimes. Parts matter and if manufacturers want the best performance, they choose the best parts. If someone says otherwise, they ain’t tellin’ you the truth.

I was surprised, let’s just say that. Sure, it works and I am a fan of simple solutions, but there are more elegant and robust solutions to this problem. The volume knob had just been pulled out of the rubber hose because the glue had failed. The shafts didn’t even line up with the potentiometer mountings. Perhaps that explains the cooling hose and the flexibility this allowed. Because of the slope of the shafts, the knobs are not parallel to the front panel, so there are inherent mechanical design issues that need to be addressed.

Maybe Redgum has improved things since this amplifier was made – I sincerely hope so.