I’ve developed and tested some improvements for the PS Audio NuWave DSD DAC. The results are astonishing and I’m now offering this service for my customers. Let’s take a look.

My apologies for the lack of articles, I’ve been inundated with work and this really slows down my writing. Anyway, Liquid Audio recently (2019) acquired a PS Audio NuWave DSD DAC. The NuWave DSD originally sold for around $1800 AUD and has just been discontinued. Most importantly though, it’s a fantastic sounding piece of gear.

In sonic terms, the NuWave DSD is smooth, organic and non-fatiguing, with epic bass performance. Music sounds free-flowing and relaxed when played through this DAC. As I often do, I figured I’d play with the DAC for a while and test a few improvements.

The NuWave DSD is beautifully constructed. Like all products though, the manufacturer has installed parts that allow it to hit a certain price-point. No surprises there and I’m in no way criticising PS Audio for the parts they chose.

On the contrary, they use excellent parts, like Nippon Chemi-Con and Panasonic capacitors, two brands I use all the time. So what am I getting at here? Well, PS Audio uses great branded caps but not the best grades for audio. Power supply capacitors are critically important to the sound of a device. I knew I could improve the DAC with a handful of better, more expensive parts if I could find a couple of spare hours to do it…

I’ve upgraded many DACs and CD players over the years, including the Musical Fidelity M1 and TriVista 21 Tube DAC. With affordable improvements in mind, I took a peek and ordered some of my favourite Nichicon audio grade filter capacitors, in sizes that would fit. I already had Panasonic parts in stock to replace the two smaller capacitors.

This upgrade process was thankfully much simpler and less time-consuming than that which I employed for the M1 DAC I upgraded recently. It’s also a better-sounding DAC before any work is done.

I’ve used better parts from Panasonic and Nichicon. In this case, I chose Nichicon KG Gold Tune and Panasonic FM. These are two of the highest grade parts from these manufacturers, around twice the price of the factory parts. This makes a real difference to the bottom line, so it’s no surprise or failing that PS Audio chose the parts they did.

Are there even better parts available? Yes, but the trick is to find sensibly priced parts that fit. I’ve had a lot of experience with the parts I’ve used here and I know how well they work. 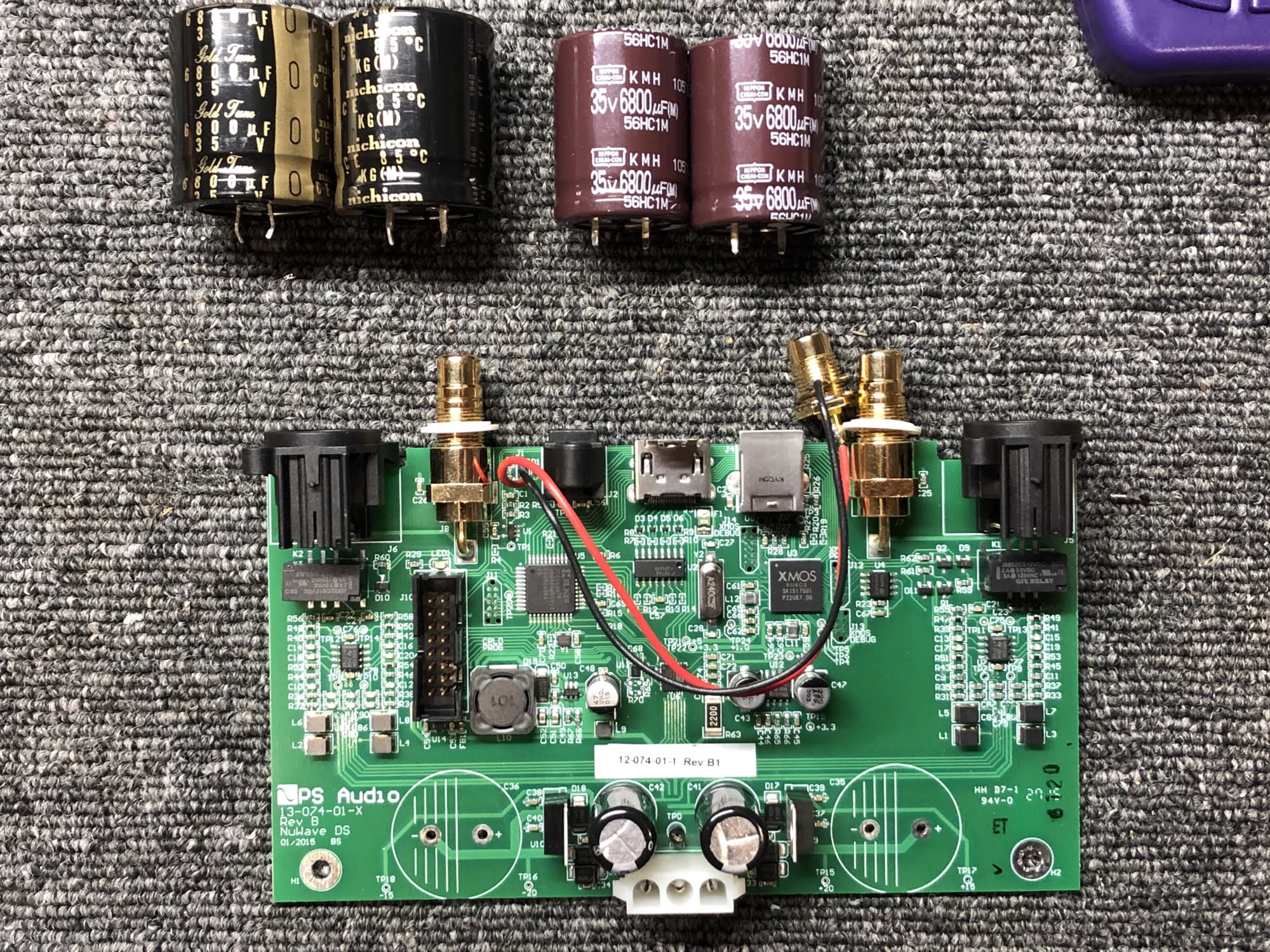 I’ve since added some additional changes to NuWave DSDs sent to me for improvement. In mine and other NuWave DSDs, I now bypass the main filter capacitors with premium WIMA polypropylene film capacitors, or polystyrene film capacitors where customer budget allows. I also now use Nichicon audio grade parts for all four large capacitors and have tested a different, and better filter capacitor option for those who wish to have the very best performance. The additional improvements are more subtle but definitely worth it and take the performance past that of my original iteration.

I generally tend to understate things, but WOW, this made an immediate sonic difference for the better. I guessed it would, but this one even caught me by surprise! As soon as I hit play I heard the difference and so did a buddy of mine with very good ears. He was unequivocal –

Everything is significantly better post-upgrade. There’s more air, greater space and everything sounds even more fluid and organic. Really, the great qualities of this excellent DAC have just become more obvious by significantly increasing the spend on power supply parts.

Let me again say how very nice this DAC sounds out of the box – smooth, warm, relaxed, articulate. Comparing it to other well-regarded heavy-hitting gear, the NuWave DSD acquits itself incredibly well.

Using my Meridian 506 as a transport, the improved NuWave DSD sounds even smoother, more beguiling, more velvety. I’m very impressed, the mid-range is glorious and the bass is some of the smoothest, natural and most impactful I’ve heard. There’s also a welcome absence of digital glare, so my NS-1000Ms are happy. The NuWave DSD is definitely one of the nicest DACs I’ve heard for sensible money.

I’ve now upgraded two of these units for Dave, a customer of mine. Here’s what he had to say upon hearing the initially upgraded unit for the first time:

(had) my system playing last night. You upgraded the PS Audio DSD NuWave DAC about a month ago. Now, I have the speakers back to try everything. Simply amazing mate! Cleaner mids and highs, more visceral, present, transient, and controlled bass.

Later, after having compared his upgraded NuWave DSD with a much more expensive PS Audio DirectStream DAC, Dave sent me this:

My mate brought over his new PS Audio DirectStream DAC. Head to head, (your) mod’ed NuWave had greater obvious detail, sound-stage, and musicality. The $10k DirectStream was dark, small sound-staged, distant, colder, less detailed, preserving only some respect in the bass.

Thank you for this feedback, Dave. It’s incredibly pleasing to know that a few carefully conceived improvements can make such a huge difference to a piece of equipment. Note that my latest improvement iteration is even better!

With any type of music, the PS Audio NuWave DSD sounds fantastic. It’s great out of the box and noticeably better after the improvements I designed and implemented here. Best of all, my modifications are very affordable.

It takes time, money and energy to develop and implement improvements like this one. All the content on my site is free, so please consider donating if you enjoyed my article. It feels good to give a little back, we all benefit and I’m encouraged to produce more articles like this.