Here’s a closer look at a Denon DP-30L direct-drive turntable and a reminder of why turntables need expert attention.

This particular Denon DP-30L direct-drive turntable came in having just been fitted with an Ortofon 2M Red moving magnet cartridge and new audio cable. You’d think she be good to go, right..?

For more Denon DP-30L goodness, check out my service and review article.

A well known local hi-fi store fitted the Ortofon 2M Red to my customer’s Denon DP-30L. I have to say this was easily the most misaligned cartridge I’ve ever seen. The images below don’t really do justice to just how bad this was. I can say that whoever installed this had no idea what they were doing.

Note the heavy misalignment of the cartridge in the headshell. Some deviation from zero is acceptable when shooting for a particular alignment. Rarely is much needed though and certainly never this much. The cartridge mounting distance or overhang was also incorrectly set. These fundamental issues are easily fixed, but the deck should have been set up correctly in the first place.

There were a couple of other problems with this lovely deck. Firstly, the owner’s friend had fitted a new audio cable for him. Nice of him to do that, for sure, but he used the wrong type of cable and one that is too thick/stiff for the job.

This looks to be a car stereo cable, purchased from a local electronics supplier. It’s not a grade or type that we would normally use for a turntable. It’s so thick and stiff that he was forced to Dremel out the back of the cabinet to accept it. There was a problem with quality control – you’ll see what I mean in a moment.

Right now you’re thinking – “Mike, you’re pretty harsh on these issues…” The thing is I’m happy with work done well. The basics are here but the problem is that the owner experienced channel dropouts after this cable was installed. Can you spot why, from the image below?

Hopefully, you can see it – a whisker of copper from the new cable is shorting out signal and ground in the left channel. This is why the deck never worked properly after the cable was installed. After proper trimming, cleaning and inspection, the joints look like this: 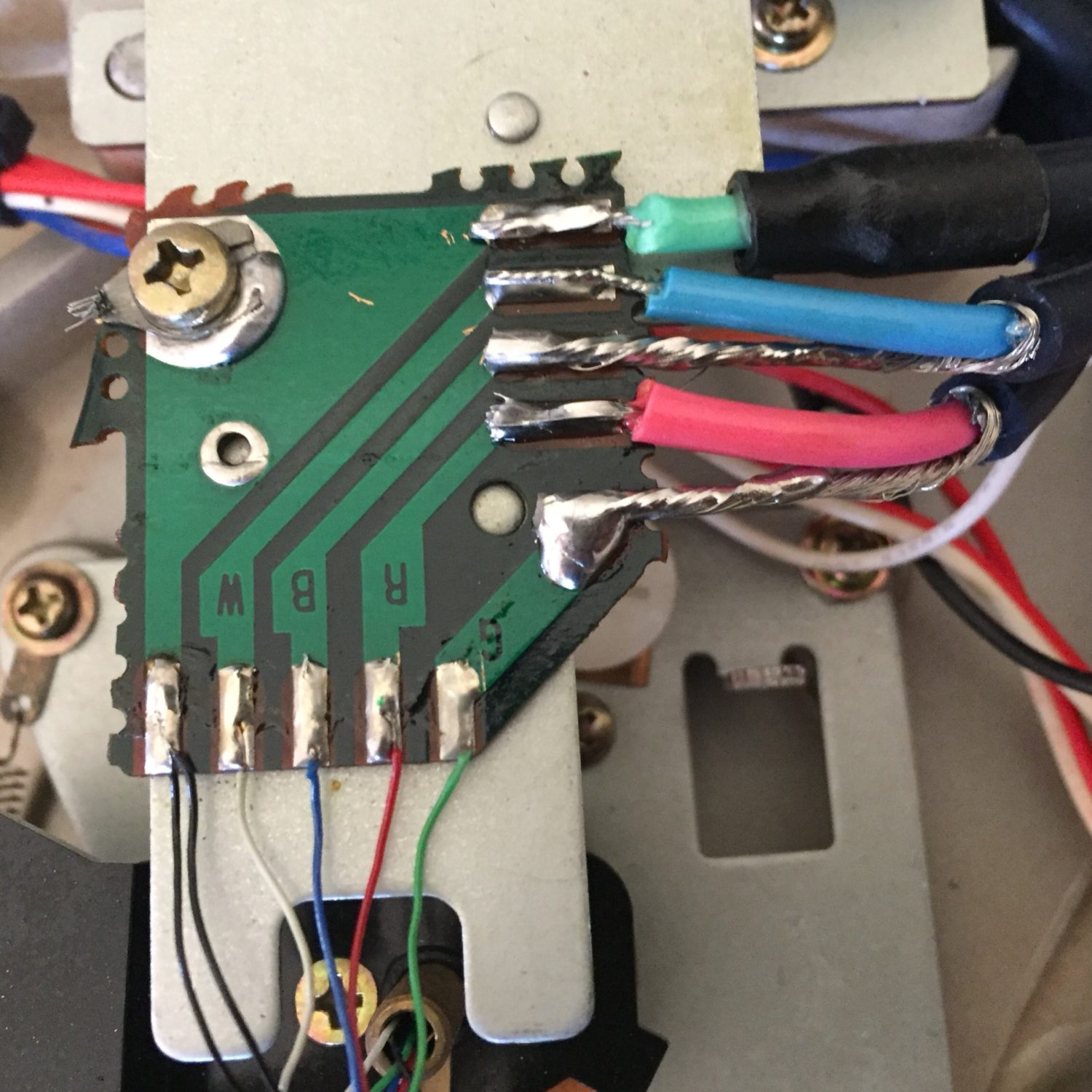 There’s quite a difference and I’m hoping that readers can see that attention to detail really matters. In this great example, it makes the difference between a deck that works perfectly and one that doesn’t.

The last issue I wanted to resolve on this Denon DP-30L was that the automatic arm lifter was non-functional. Normally, the lifter drops the needle at the start of a record and lifts it at the end. In this deck, the arm-lifter linkages were jammed.

I disconnected everything and, after lubrication and careful examination, I determined that the mechanism had been reassembled incorrectly, presumably by a previous tech troubleshooting the arm-lifter mech. Once I’d resolved this, the arm lifter worked perfectly.

Finally, I serviced the DP-30L motor and made some adjustments to the master speed controls on the mainboard, so that when you switch from speed to speed, no adjustment of the vernier speed control is needed.

Lastly, the deck went to the workshop for some electronic adjustments. I support the deck on a jig to allow access to the mainboard underneath. This is an extra step that makes the difference between a deck that works and one that works perfectly.

I adjusted the master speed controls so that the verniers now operate right in the middle of their range. An equal number of turns of the knob up and down produces the same speed adjustment up and down, say 3% each way. Both speeds (33 and 45 rpm) are spot on now when you switch between them, without needing to fine-tune with the vernier.

The DP-30L now runs perfectly, as she should after a service like this. To quote the owner:

Thanks to my customer for trusting me with his lovely turntable! 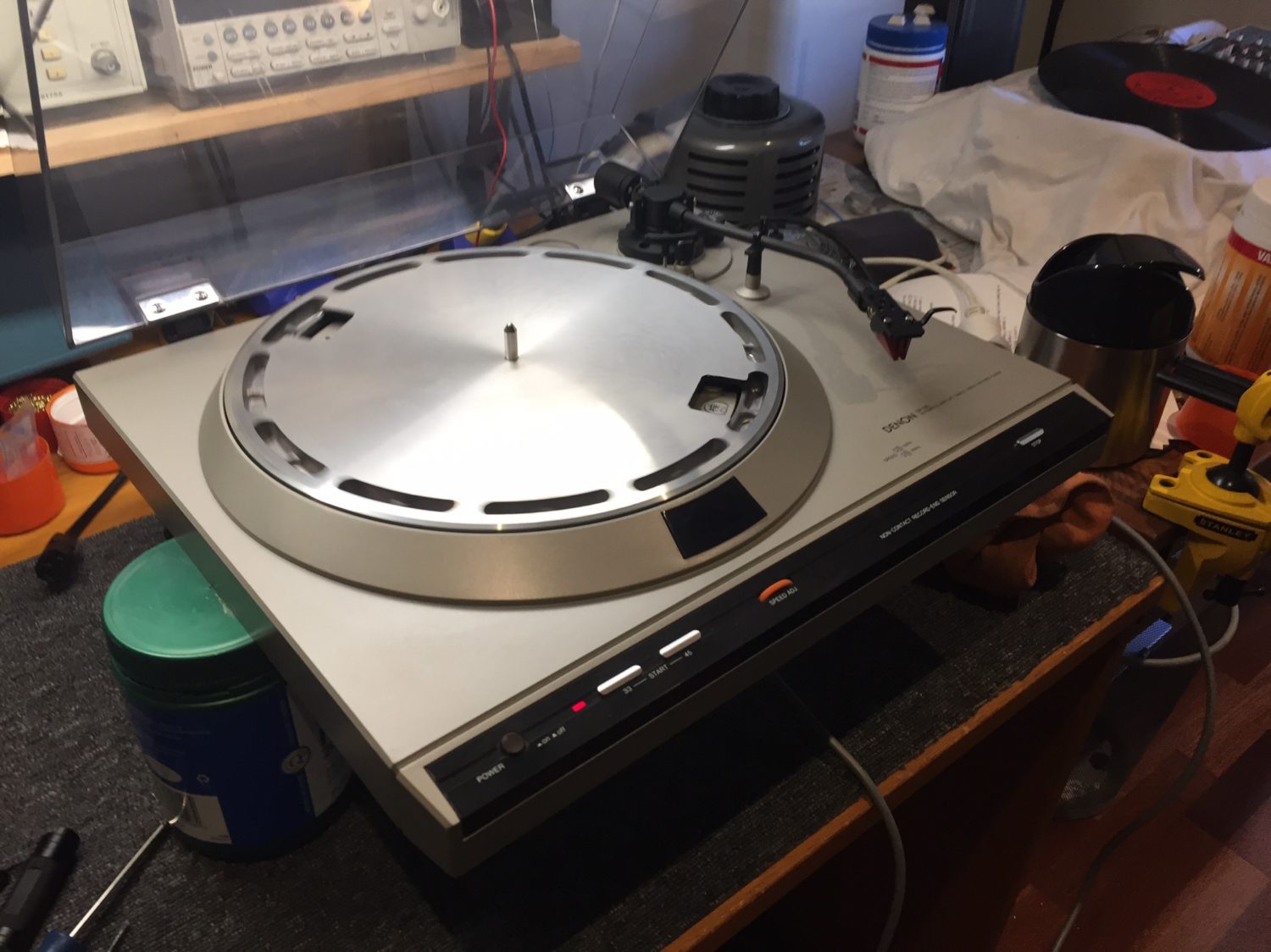 Thanks for reading and feel free to comment! If you require advice or assistance, please visit our our Contact page. Note: commercial promotion, URLs etc are prohibited. Cancel reply