A lovely customer of mine rang me to tell me that his beloved Pioneer SX-1250 monster receiver had died in a cloud of acrid smoke. Naturally, he was devastated, and asked if I could restore the old beast for him.

The Pioneer SX-1250 is a monster receiver in the truest sense of the term. There are several large receivers like this, created at a time when the Japanese manufacturers were competing for bragging rights. Another similar model is the Sansui G-8000 Pure Power DC Stereo Receiver. I repaired one of those monsters, here.

The Pioneer SX-1250 had died, literally in a cloud of smoke, so in terms of diagnostics, I was looking for a smoke generator. I found one – well two actually. The first was on the bottom panel, where one of the large electrolytic main filter capacitors had spewed its electrolyte out of the pressure release vent and directly onto the metal bottom panel. This most definitely would have made a noise and created some smoke.

The other possible culprit was one of my favourites – a Rifa epoxy film capacitor, X-rated for connecting across active and neutral, that was blackened and burnt. These things fail with monotonous regularity. This particular cap was 0.033uF and I have lost count of how many of these I have seen fail. What happens is that the epoxy cracks, allowing moisture and other contaminants into the case, which then causes a partial short, which then allows a small amount of current to flow and then more until finally – bang! They blow like a firework, often when the equipment is turned off.

This repair required partial disassembly of the power supply. Specifically, I removed the two pairs of main filter caps as i had decided to replace them all with brand new, high-spec and slightly larger capacitance Nippon Chemi-Con parts, imported from Germany. The standard capacitors were 22,000uF, I chose 27,000uF replacements.

There are several considerations when replacing main filter capacitors and they apply to any amplifier or power supply. First is the mechanical fit. The original caps were secured by a system of fixings that required the cap diameter to be precisely 63.5mm. This is a standard size, but it just means that you have to choose the same diameter caps to replace the originals unless you want to have to mess around with adapters and kludges, and I never do.

Then there are the electrical properties of the capacitors to consider. These needed to be 80V rated and the originals were 22,000uF, so ideally the replacements would be that size, or slightly larger. I say slightly because this really must be calculated. When the equipment is turned on, the main filter capacitors charge up and as they do, they effectively present a short-circuit across the mains, until they have charges. This charging or in-rush current as it is known will be designed for and the fuses specified to allow for this current and not too much more.

If you randomly use larger capacitors as people seem to like to do, you risk increasing the in-rush current to the point where fuses could blow or worse still, other parts of the power supply circuit could be overloaded and damaged. In this case, however, 27,000uF capacitors were within what the design could tolerate and worked very well. They were not as tall as the originals but were the same diameter and even the same brand – Nippon Chemi-Con – a very high-quality choice, used in industrial and laboratory environments.

The new caps had different fastener requirements to enable the bus bars and wire connectors to be held in place, so I used a new set of M5 Allen bolts and lock washers, which looked great once installed.

After replacing the dead X-rated mains capacitor and all the mail filters, it was time to power up the beast. Apart from my room lighting dimming as the filter capacitors charged up, she turned on without a problem and it was extremely satisfying to hear the “click” of the protection relays after the circuits stabilised.

The next part of the job involved carefully adjusting the power amplifier blocks. Amplifiers generally require two standard adjustments – DC offset nulling and idle current or “bias” adjustment. Adjusting the DC offset involves connecting an accurate multimeter across the speaker outputs and measuring any DC present. Ideally, there should be none at all, because DC voltages flow continually through the voice coils of the speakers and are dissipated as heat. Too much DC will literally cook the voice-coils. There will usually be a servo circuit that continuously adjusts the DC to a zero point, but this zero point usually needs to be correctly set and I did that here on the SX-1250.

The second adjustment to make is to what we call standing current or bias. This represents the amount of current flowing through the output devices at the “idle” or no musical signal condition. This adjustment is critical because it sets the point at which the output transistors will switch from class A to class B operation and plays a crucial role in how much heat is dissipated by the output devices when no signal is present. These standing currents must be accurately set after the amplifier has had a chance to warm up and stabilise.

I also did a lot of cosmetic work to this beautiful amplifier. I cleaned the entire chassis, removed all the knobs and cleaned them in warm, soapy water, cleaned the front panel with Ambersil foaming cleaner, cleaned the genuine wood veneer and nourished it with a little oil, lubricated the tuner dial mechanism and a couple of other things.

Lastly, I tested her through headphones as I usually do. Testing showed that the switches and controls were noisy, a result of dirt buildup. To clean them, I used isopropyl alcohol. I got into every nook and cranny of the front panel controls with the isopropyl. Once everything was doused, and being extremely careful not to allow the isopropyl to migrate to the tuner display, for example, I exercised all the switches and controls for several minutes to work the alcohol through. Quite a bit of fluxey, yellow residue dripped out of the end of the from panel subassembly after being sprayed with isopropyl, and the controls worked perfectly afterwards.

Needless to say, when Frank arrived to pick up his pride and joy he was thrilled. He couldn’t hide his excitement at seeing his amp so clean, with beautiful new main filter capacitors and working better than she had in years. After all this work, the amp would have sounded perhaps better than she ever had, even when new, because of the improvement I made to the power supply which flow through (literally) into all the signals that pass through it. 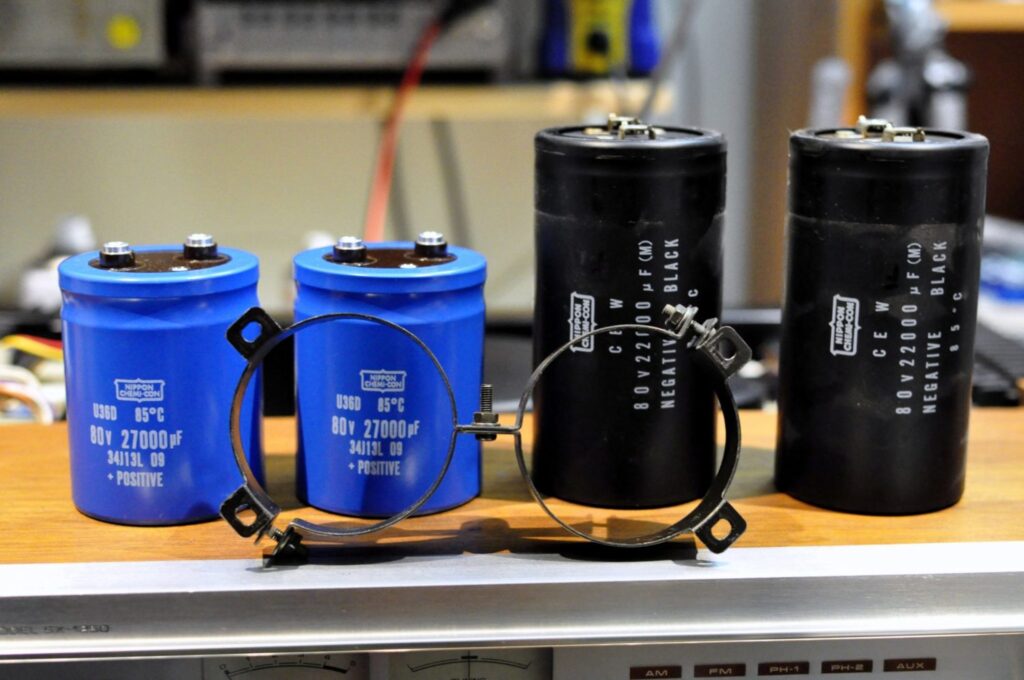 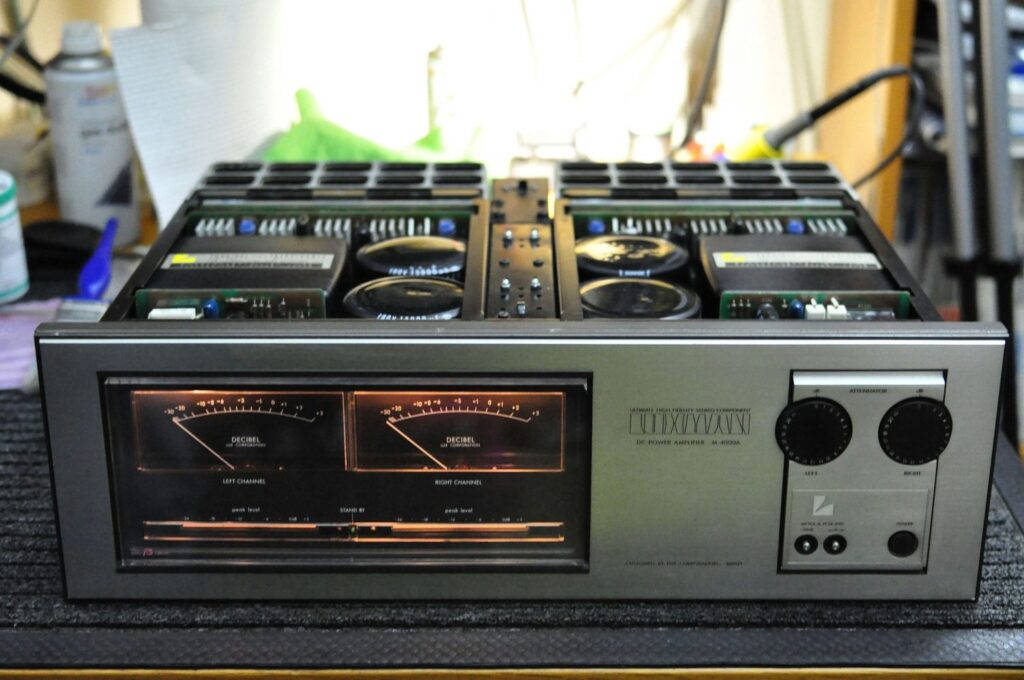 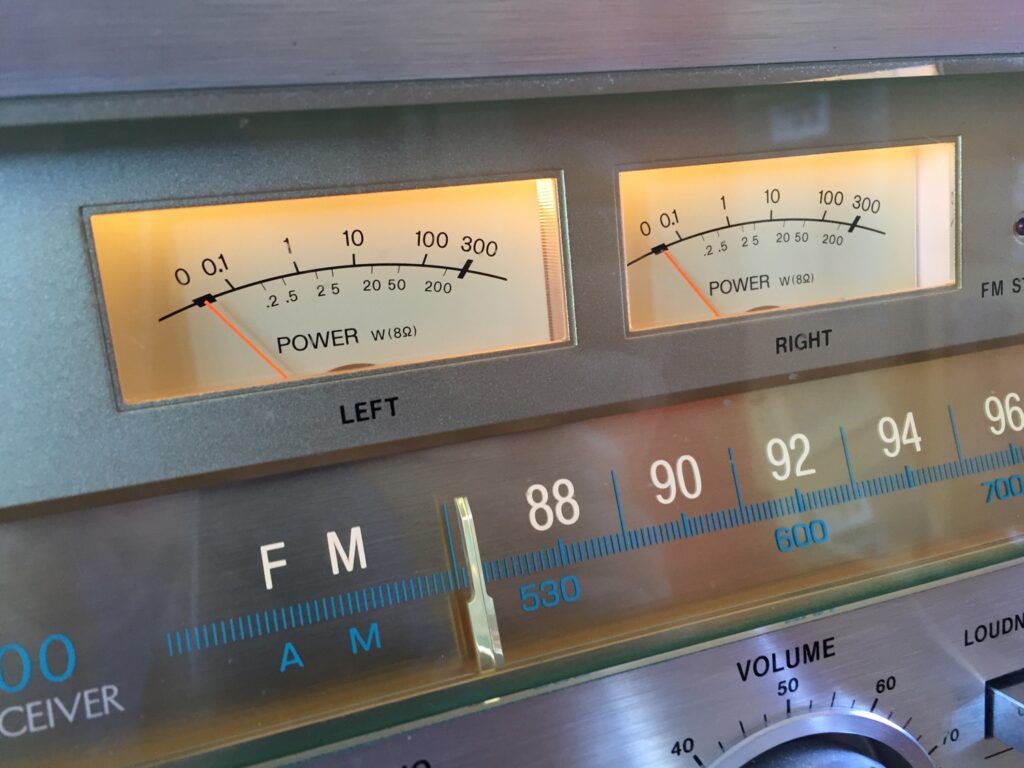