In my second #Krellmonth article, I look at the repair and restoration of this lovely Krell KAV-300cd compact disc player.

Thanks for joining me for my second #Krellmonth article. The Krell KAV-300cd CD player is a beautiful machine from the late ’90s, a period when Redbook CD was reaching maturity and producing some really lovely sounding CD players. When you add in a TEAC VRDS CD drive and Krell’s outstanding build quality, you have a really wonderful, though expensive machine. 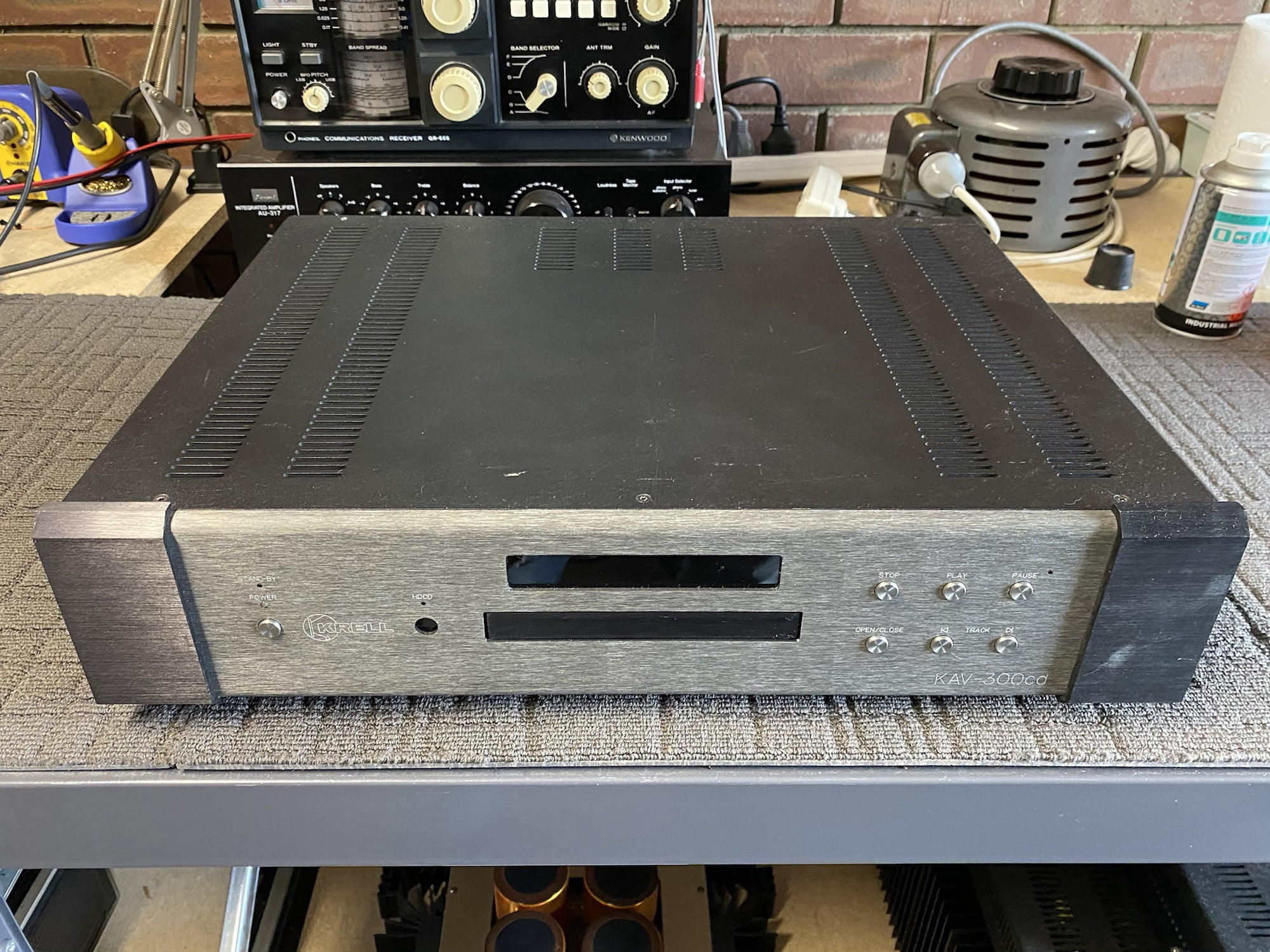 As mentioned, at the heart of the KAV-300cd lies another fantastic VRDS mechanism. These are outstanding mechanisms and you can read more about a TEAC VRDS-10 CD player with a similar VRDS drive here. These drives feature a large disc clamp/stabiliser and a powerful (for a CD player) direct-drive motor, though the one in this mech is not the biggest VRDS motor I’ve seen.

As usual, the KAV-300cd has a very nicely designed and built discrete high-current power supply. Krell’s belt and braces approach to regulation, using classic TO-3 devices mounted on small heatsinks is also evident here. This is the right-hand board and these devices dissipate quite a bit of heat, part of the reason for my overhaul. You can read more about the Krell KAV-300cd in this great Stereophile article. 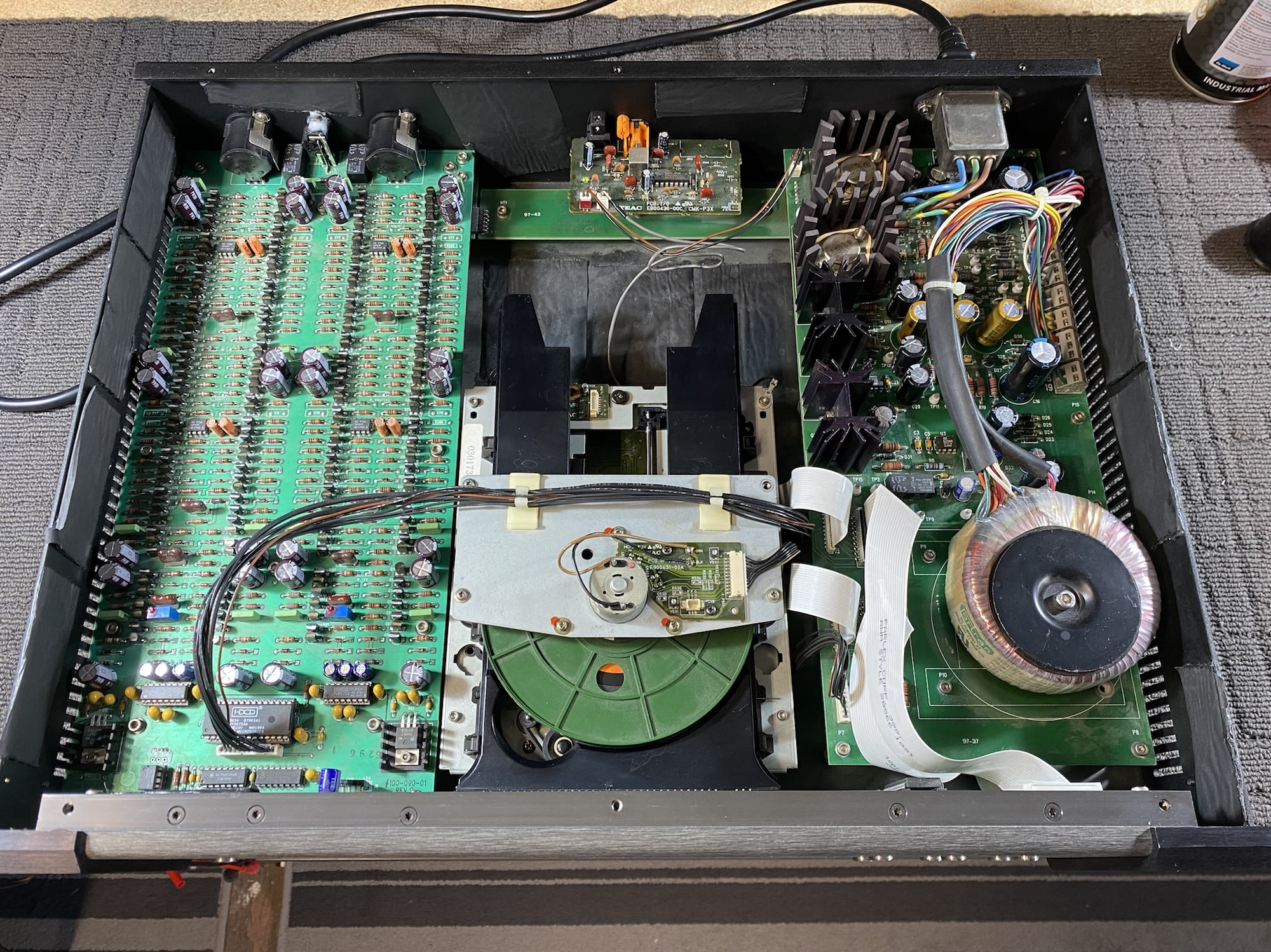 The DAC and discrete class-A analog output buffer of the KAV-300cd make up the left-hand board. The DAC chips used here are the great sounding Burr-Brown PCM1702K. This was the precursor to the legendary PCM1704K, widely regarded as one of the all-time greats and some of the last PCM chips before bitstream DACs hit the market. I’ve heard and owned players that used the 1702 and they all sounded really good. For me, I always preferred the sound of the great PCM DACs over the bitstream ones that followed.

The last point worth mentioning is that the KAV-300cd decodes High Definition CD or HDCD. It does so using the highly regarded Pacific Microsonics HDCD chip. This feature and chip are commonly found in the better players from this era. HDCD encoded discs will play on any machine, but those equipped with the HDCD chip will resolve additional air and detail not available in regular non-HDCD equipped machines.

Compact disc player repair is becoming somewhat of a dying art, like cassette deck repair. In Perth, there don’t seem to be too many left who work on CD players. I’m happy to offer the service and actually get a kick out of fixing CD players, so it’s not something I’ll stop any time soon.

As you’ll no doubt have gathered, as nice as most of the equipment that I work on is, most of it doesn’t work very well when it comes in. This CD player had power supply issues, was blowing fuses and needed some TLC in the form of an overhaul to address various smaller issues with old parts. Interestingly, someone had gone in previously and replaced some, but not all, of the power supply capacitors. Some of the parts they used were very ordinary, some good. Strange work. They also neglected to re-mount the regulator devices on new thermal pads and other general maintenance.

Krell players from this era typically used heavy-duty linear power supplies that generate quite a bit of heat and this KAV-300cd is no different. It draws around 50 Watts, more than many modern amplifiers and enough to cause accelerated degradation of capacitors anywhere near the power supply heatsinks. All of this needed attention, plus a few other bits and pieces like the mechanism and the DAC/output board.

If you’d like to watch a video of the work I did, go right ahead!

The first part of this and many jobs like it is to take care of the power supply. Looking at this one, we can see that someone had worked here before, replacing some, but paradoxically not the most obvious of the power supply capacitors, and leaving the degraded TO-3 thermal pads in place. Whoever worked on this before me also left the transformer loose and asymmetrically mounted, so all of this needed resolution.

After a discussion with my customer, it was decided that whilst the KAV-300cd was with me, I would complete the overhaul by finishing the DAC/analog board. Again, someone had worked here to replace some, but not all of the small electrolytic capacitors that suffer most due to thermal aging. I removed the board and finished the work, installing premium parts wherever they were needed.

The last piece of the puzzle in the case of this KAV-300CD was to service the ‘mech’ or CD drive as some might call it. This involves removing and cleaning it, lubricating moving parts with suitable synthetic greases and oils, cleaning the laser optics and performing adjustments where necessary. The drive ran more smoothly and reliably after this work, a fairly typical result.

What an improvement. This KAV-300cd now runs beautifully, doesn’t blow fuses and plays discs without fuss. She sounds great, rich and organic, especially for a machine from this era when players were often a little cold and sterile sounding.

That wraps up my latest #Krellmonth article on the repair and restoration of this lovely Krell KAV-300cd compact disc player. If you’re reading this, you likely already know that some of the best CD players hail from this era. Players like this are almost always worth repairing and sensible overhaul work, done well, can extend life by many years.

If you’d like me to look at your CD player, feel free to get in touch! 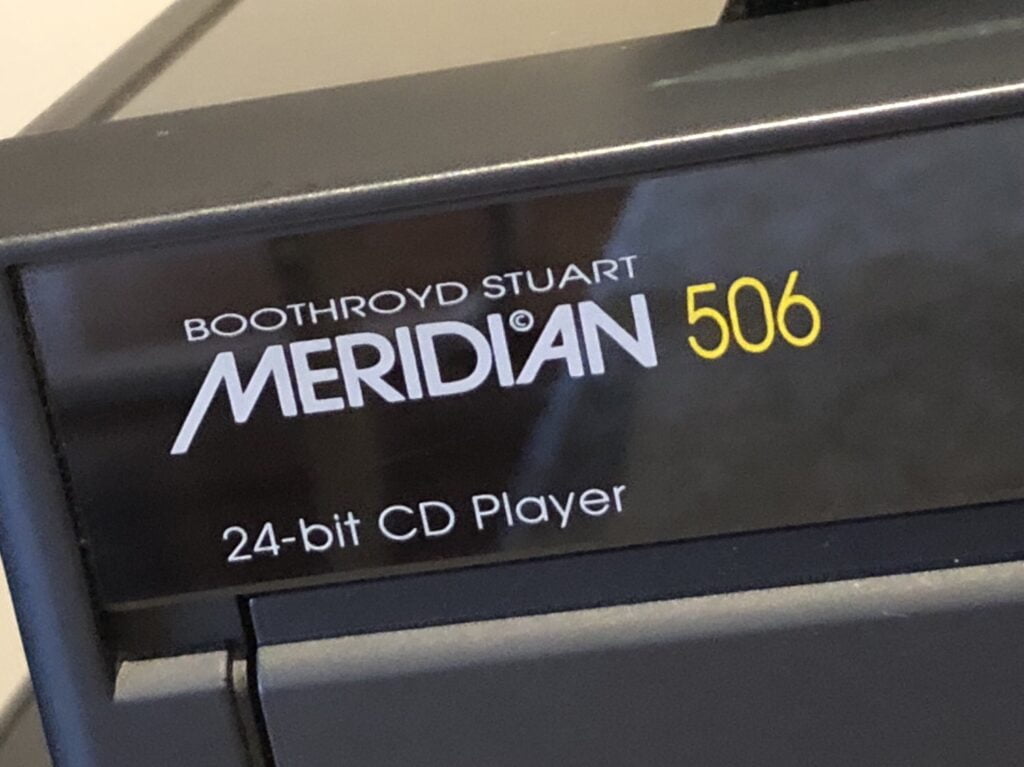